Today's word from mythology is tantalize, which means to torment someone with the sight of something desirable that is just out of reach. The word comes from Tantalus, the King of Phrygia, who was tortured in the afterlife by having to stand up in water that reaches to his chin, with tree branches full of fruit directly in front of him. Every time that he tried to drink, however, the water would recede so that he could not drink, and every time that he tried to reach out and pluck one of the fruits, the branch pulled away so he could not reach the fruit.

King Tantalus committed various crimes that could have led to his famous punishment. One of his most notorious crimes was to sacrifice his own son, Pelops, cooking him up and serving him at a banquet for the gods. The gods realized what was happening, but only after Demeter had already eaten Pelops's shoulder. Clotho, one of the Fates, brought Pelops back to life, but because one of his shoulders was missing, it had to be replaced with a shoulder of ivory.

The image below is a 16th-century illustration of a poem about Tantalus by Alciato: 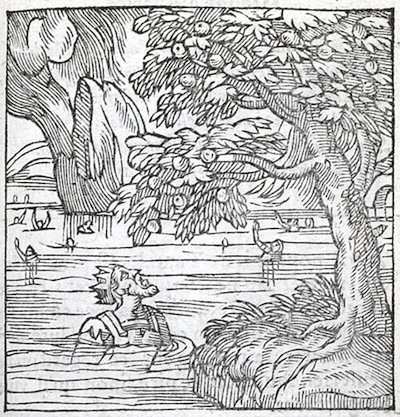 And here is a Renaissance painting by Joseph Heintz the Elder: 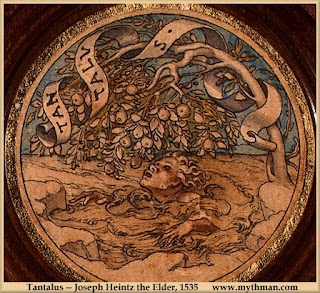