The Lion Learns to Write

You may have seen this proverb making its way around the Internet: Until the lion learns how to write, every story will glorify the hunter. 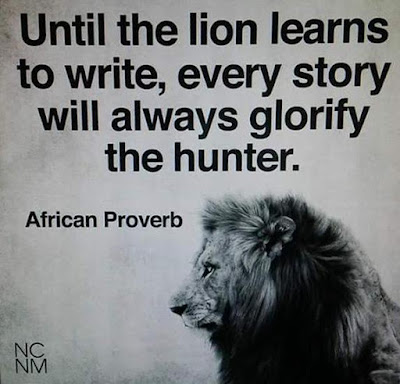 I'm not sure if it is actually an African proverb or not; its current popularity probably goes back to John Oliver Killens' Black Man's Burden (find out more about Killens at Wikipedia). You'll also see it attributed to H. Rap Brown.

There's a fable of Aesop that conveys the same message, but it is about sculpture rather than writing. Here is an ancient Greek version:


A man and a lion were arguing. The man proclaimed the superiority of the human race, while the lion argued on behalf of his own kind.

As they were contending with one another as to who was superior, the man produced as evidence the statue of a lion being defeated by a man.

The lion retorted, 'And if there were also sculptors among us lions, you would see more people being conquered by lions than lions by people!'

In this medieval Latin version, the lion takes the man to see a true performance:

A man and a lion were arguing about who was best, with each one seeking evidence in support of his claim.

They came to a tombstone on which a man was shown in the act of strangling a lion, and the man offered this picture as evidence.

The lion then replied, 'It was a man who painted this; if a lion had painted it, you would instead see a lion strangling a man. But let's look at some real evidence instead.'

The lion then brought the man to the amphitheatre and showed him so he could see with his own eyes just how a lion strangles a man.

The lion then concluded, 'A pretty picture is not proof: facts are the only real evidence!'

Here are some illustrations for the Aesop's fable.

Harrison Weir. The man here is none other than Hercules (famous for subduing the Nemean Lion as one of his labors). 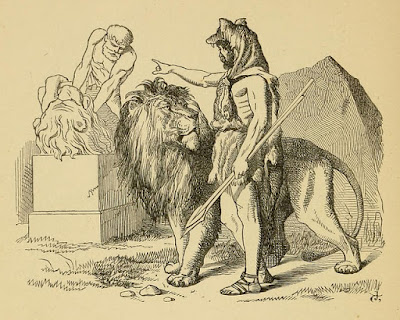 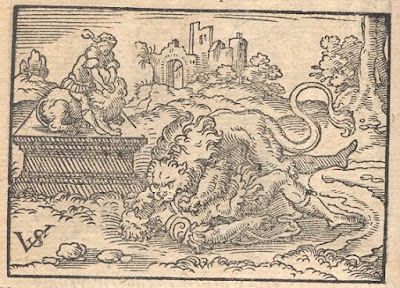 Walter Crane: Here the lion snarls angrily at the statue. 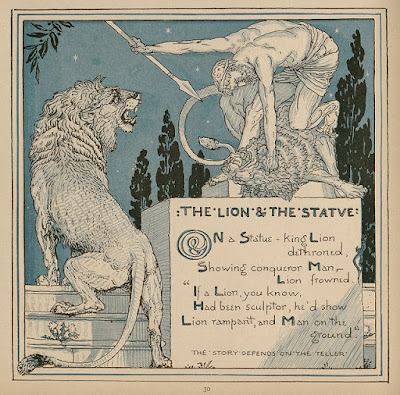 I do not know the source for this image (you'll see it here and there online); it shows the man in modern military garb: 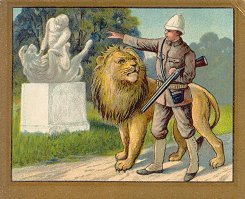