Today's word is "juggernaut" — and for this word, there is an entire Wikipedia article devoted to its origin and usage in English.

Short version: the word comes from Sanskrit Jagannatha, World-Lord, an honorific title sometimes applied to Krishna, one of the avatars of the god Vishnu, although the Jagannatha is also worshiped as a separate divinity.

The English usage is from the so-called "Chariot of Juggernaut," which was a cart carrying an image of the Jagannatha for a Ratha Yatra (chariot procession) festival. These temple carts could sometimes be huge in size, hence the sense of a "juggernaut" as a moving force that cannot be stopped. According to a more fanciful legend, the most devoted followers of Jagannatha would throw themselves under the wheels of the wagon to be crushed to death in an act of sacrificial devotion, giving the word "juggernaut" an additional sense of blind devotion. This fanciful idea goes back to the 14th-century Travels of Sir John Mandeville, which you can read about in this Wikipedia article.

The ISKCON movement (International Society for Krishna Consciousness) has promoted the Jagannatha festival around the world. The image below shows a Jagannath Ratha Yatra in London, 2011: 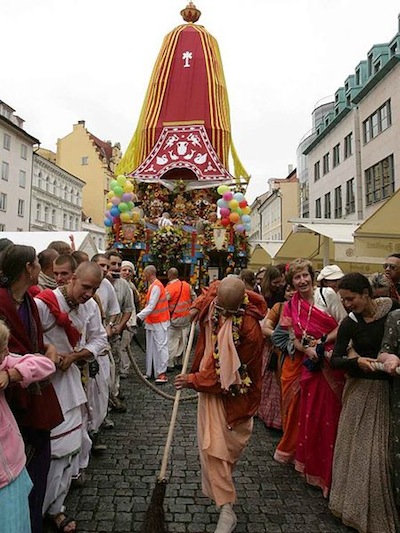